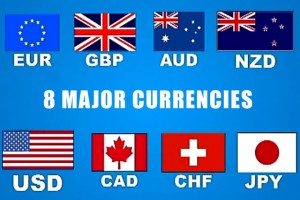 Currency Pairs
A currency pair is the quotation of the relative value of a currency unit against the unit of another currency in the foreign exchange market.
In order to trade currencies, they must first be paired together. The USD/CHF is the US Dollar and the Swiss Franc paired together. This way we can monitor the changes in the currency rate between the two. A currency’s value only changes relative to another country’s currency. Using charts, we can see how the market moves. Using “technical analysis”, we can determine if the chart will move up or down. If the chart moves up, we want to buy, and if the chart moves down, we want to sell.