The main points in DB’s rationale behind this call along with its target for this structural short EUR/USD trade:

1- Dollar a high-yielder soon: “A striking pattern of previous Fed hiking cycles is that the dollar has weakened following the first FOMC rate increase. The most likely reason is that US yields have ranked in the bottom-3 or below at the start of all major Fed hiking cycles since the 1980s. Low-yielding status is historically associated with significant dollar depreciation, even as rate differentials have widened in favour of the USD as the rate cycle unfolded. This Fed cycle is unique because the dollar is already and remarkably a mid-yielder compared to the rest of the world: US short-end rates are currently higher than half of G10 FX, and assuming current forwards are realized (2 Fed hikes this year) the USD will become a full-fledged high-yielder by the end of the year. A highyielding dollar leads to significant dollar outperformance based on past experience, making the ranking of US yields an important dollar supportive factor in 2016 (chart 1),” DB argues. 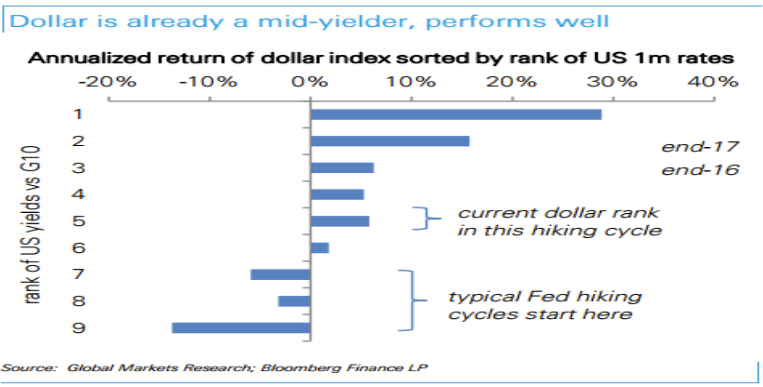 2- Risks skewed toward better US data. “Another unique part of the current Fed hiking cycle is that it has started at a time of disappointing US data releases. The last year has seen the longest run of uninterrupted negative US data surprises going all the way back to the early 2000s (chart 2). Similarly, the number of economists expecting 3%+ growth this year has dropped to a new post-crisis low according to the Philly Fed survey of professional forecasters. The odds are therefore skewed the other way. Even if it will only take two Fed hikes to make the dollar a high-yielder, there are upside risks to both growth expectations and the number of Fed hikes that are priced in,” DB adds.

3- Portfolio flow unique as well. “Typical dollar bull runs have been accompanied by a significant rise in foreign US inflows. But there is something unique about the current portfolio cycle as well. The USD is currently benefitting from large repatriation of assets by American investors, whose selling of foreign securities is running at an all time high. This is driving the US private basic balance to the highest levels in almost two decades, which is suggesting that the US TWI is in-line with portfolio flow trends. The dollar’s reliance on repatriation makes American portfolio preferences the most important factor behind the current dollar up-cycle. It is the dearth of investment opportunities abroad rather than renewed foreign interest that is driving dolar strength,” DB notes. 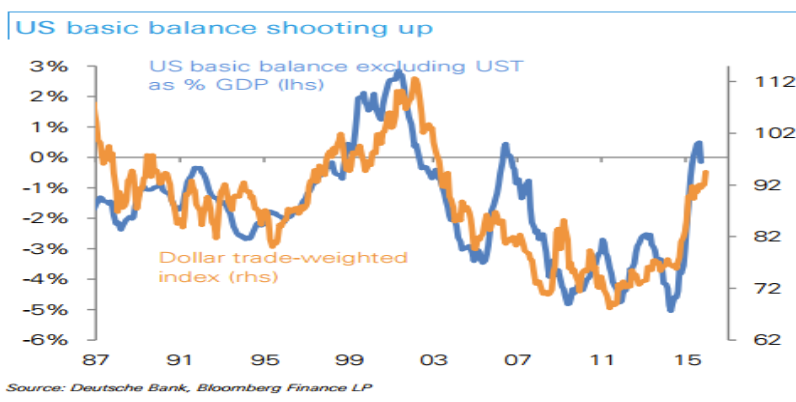 4- Europeans abandoning Europe. “On the other side of the Atlantic the recovery remains intact but the euro has not been responsive to better European data. Ongoing ECB dovishness, negative yields, and European investors’ large underweight in foreign assets all suggest that these outflows are likely to continue, a phenomenon we have previously termed Euroglut. Interestingly, the composition of portfolio flows between different investors has undergone a significant transformation over 2015. Non-bank portfolio flows have become the dominant portion of Euro-area capital outflows, suggestive of underlying shifts in European investor preferences rather than changes to bank balance sheets that are also typically hedged (chart 4),” DB adds.

5- ECB taper not important as Fed rate hikes. “Persistent weakness in the oil price and downside surprises to inflation suggest that the risks are skewed toward more ECB easing this year. But could a decision by the ECB to taper its QE purchases later mark the end of the EUR/USD bear run and by extension the long-term dollar up-cycle? It is doubtful this would be the case because ECB decisions on QE are more relevant for the long-end of the European curve rather than near-term rate expectations. The latter in turn exert significantly higher influence on FX (chart 5). So long as the European short-end remains anchored, it will be the pace and timing of the Fed cycle that will dominate dollar drivers rather than the pace of ECB QE,” DB argues. 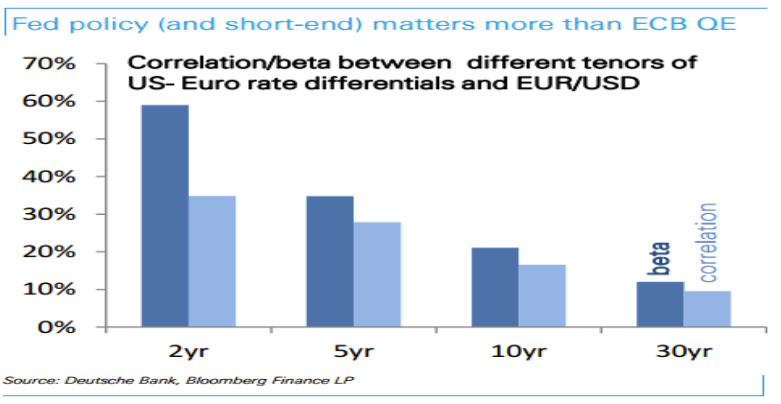 6- China and risks to dollar outlook. “The biggest risk to our dollar view is a significant slowdown in the US economy that stops (rather than decelerates) the Fed hiking cycle and potentially brings easing back on the table. Beyond that, portfolio flows, relative central bank cycles, and China’s recent willingness to tolerate more dollar strength all suggest the dollar has more scope to appreciate in 2016. The latter is particularly important because past USDCNY stability has prevented the broad trade-weighted dollar from appreciating as much as the narrow index given China’s high weighting. Given our ongoing bearishness on RMB (see theme 7) we therefore prefer the broad over the narrow trade-weighted dollar, which also remains cheaper on account of CNY valuations. Indeed, even if the current dollar rally is faster than the late 1990s, it remains well within the bounds of previous dollar cycles,” DB adds. 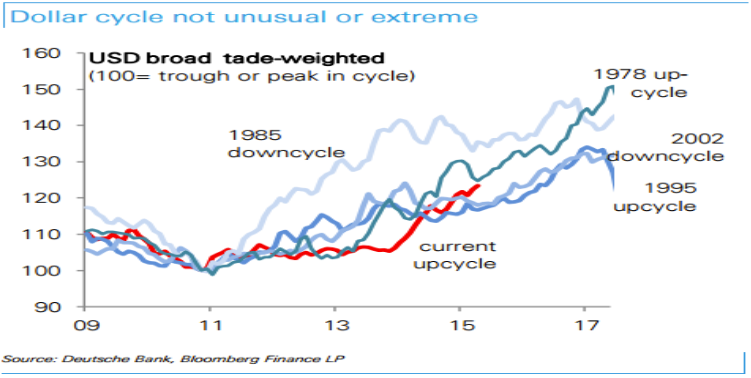