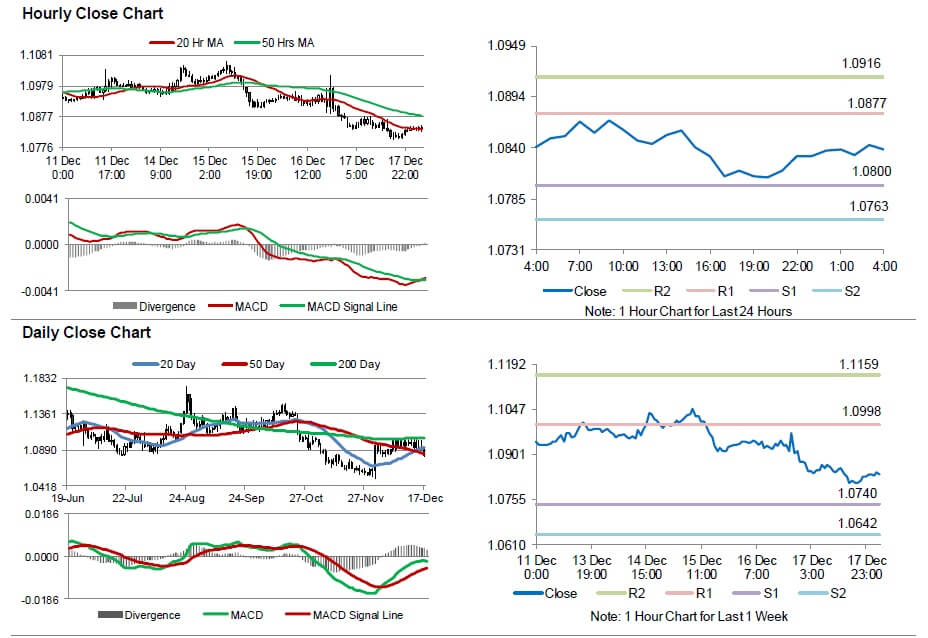 Separately, the ECB, in its economic bulletin, indicated that the Euro-zone economy will continue to grow at a moderate pace in the near term before gaining some strength over the next two years, mainly driven by a growth in the domestic demand.

In the US, initial jobless claims fell to a level of 271.0K in the week ended 12 December, indicating a sustained recovery in the nation’s labour market and compared to a reading of 282.0K in the previous week. Market anticipation was for initial jobless claims to ease to a level of 275.0K. However, the nation’s manufacturing sector continues to struggle as the Philadelphia Fed manufacturing index surprisingly declined to a level of -5.9 in December, compared to market expectations of a reading of 1.0, and after registering a level of 1.9 in the previous month.

In the Asian session, at GMT0400, the pair is trading at 1.0837, with the EUR trading marginally higher from yesterday’s close.

Going ahead, market participants will look forward to Eurozone and Germany’s consumer confidence survey data, scheduled to be released next week. Additionally, the US Q3 GDP, durable goods orders, housing price and the Reuters/Michigan consumer sentiment indices data, all due next week, will also be under the investor’s radar.