– Will There Be Another 8-1 Split Within the Monetary Policy Committee (MPC)?

A larger dissent at the Bank of England (BoE) interest rate decision accompanied by an upward revision in the central bank’s inflation forecast may heighten the appeal of the British Pound and spur a near-term rebound in GBP/USD as it boosts bets for higher borrowing-costs.

Why Is This Event Important:

Signs of a stronger recovery may push the BoE to highlight a greater risk of overshooting the 2% inflation target, but another 8-1 within the Monetary Policy Committee (MPC) along with more of the same from BoE Governor Mark Carney may spur near-term headwinds for the sterling as it drags on interest rate expectations.

Subdued wage growth paired with waning confidence may encourage Governor Mark Carney and Co. to endorse a wait-and-see approach, and sterling may struggle to hold its ground following the policy meeting should the central bank show a greater willingness to further delay the normalization cycle.

Nevertheless, the pickup in private-sector activity along with the ongoing improvements in the labor markets may encourage the BoE to adopt a more hawkish tone for monetary policy, and an upward revision in the central bank’s economic forecast is likely to spark a bullish reaction in the British Pound as it fuels interest rate expectations.

Potential Price Targets For The Release 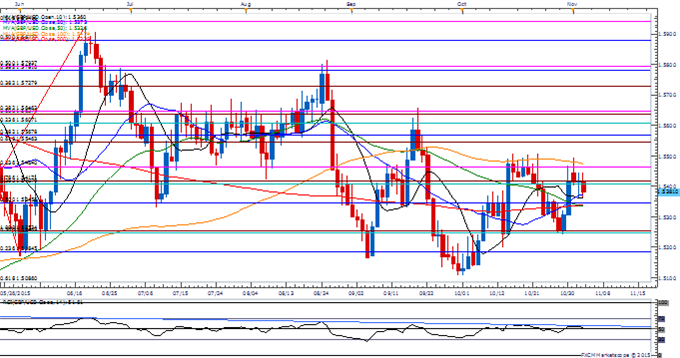 The Bank of England (BoE) continued to endorse a wait-and-see approach while keeping the benchmark rate unchanged at 0.50% in October as ‘a deterioration in the global demand environment would slow the pace of expansion further.’ Despite the 8-1 split within the Monetary Policy Committee (MPC), it seems as though the majority may look to further delay the normalization cycle as central bank largely retains a cautious outlook for the U.K. economy. The sterling struggled to hold its following more of the same from the BoE, with GBP/USD dipping below the 1.5300 handle, but the sterling bounced back during the North American session to end the day at 1.5343.