In this lesson, we’re going to teach you how to combine the Fibonacci retracement tool with your knowledge of Japanese candlestick patterns that you learned about earlier.

In combining the Fibonacci retracement tool with candlestick patterns, we are actually looking for exhaustive candlesticks. If you can tell when buying or selling pressure is exhausted, it can give you a clue of when price may continue trending.

Let’s take a look at an example to make this clearer. 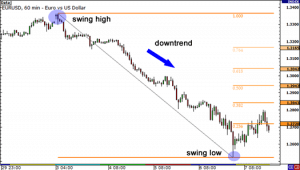 The pair seems to have been in a downtrend the past week, but the move seems to have paused for a bit. Will there be a chance to get in on this downtrend? You know what this means. It’s time to take the Fibonacci retracement tool and get to work!

Since it’s a Friday, you decided to just chill out, take an early day off, and decide when you wanna enter once you see the charts after the weekend. 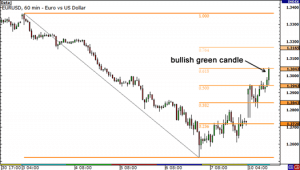 Whoa! By the time you popped open your charts, you see that EUR/USD has shot up quite a bit from its Friday closing price.

While the 50.0% Fib level held for a bit, buyers eventually took the pair higher. You decide to wait and see whether the 61.8% Fib level holds. After all, the last candle was pretty bullish! Who knows, price just might keep shooting up! 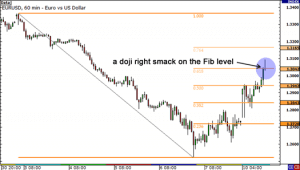 Is it time to short? You can never know for sure (which is why risk management is so important), but the probability of a reversal looks pretty darn good! 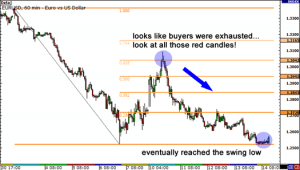 If you had shorted right after that doji had formed, you could have made some serious profits. Right after the doji, price stalled for a bit before heading straight down. Take a look at all those red candles!

It seems that buyers were indeed pretty tired, which allowed sellers to jump back in and take control. Eventually, price went all the way back down to the Swing Low. That was a move of about 500 pips! That could’ve been your trade of the year!

Looking for “Fib Sticks” can be really useful, as they can signal whether a Fibonacci retracement level will hold.

If it seems that price is stalling on a Fib level, chances are that other traders may have put some orders at those levels. This would act as more confirmation that there is indeed some resistance or support at that price.

Another nice thing about Fib Sticks is that you don’t need to place limit orders at the Fib levels. You may have some concerns whether the support or resistance will hold since we are looking at a “zone” and not necessarily specific levels.

This is where you can use your knowledge of candlestick formations.

You could wait for a Fib Stick to form right below or above a Fibonacci retracement level to give you more confirmation on whether you should put in an order.

If a Fib stick does form, you can just enter a trade at market price since you now have more confirmation that level could be holding.