Below we are trying to explain more about using the Fibonacci numbers because it really works. Fibonacci numbers really work in forex trading because they reflect the psychology of the traders and trading forex and stock is all about the psychology of the traders: When most traders decide to sell, the price goes down and when they decide to buy, the price goes up.

How can we know when traders decide to buy or sell? Fibonacci numbers are one of the tools that reflect what traders may have in their minds.

Why Fibonacci numbers can reflect what traders have in their minds? Are they magic numbers?

Well! For our trading job we just need to know that Fibonacci numbers work and can show us the way. Why they can show us the way is the question that its answer has no impact on our trading, BUT I am sure you are eager to know. This is explained above. When Fibonacci numbers are the key numbers in everything in the world from the arrangement of atoms, molecules, flowers and … to planets, stars, galaxies and … and when they can be seen in all of our body organs and even in our DNA molecule which is the database of all of our characteristics and behaviors, SO they can be seen in the forex and stock price movements because as I said the movement and direction of the price is the result of traders’ (buyers and sellers) behavior.

It makes sense, doesn’t it?

Ok! Now let’s learn more about using the Fibonacci numbers in our trades.

One of the best places to plot the Fibonacci levels is the high and low of a range. When the market is slow and in fact is in an indecision situation that means traders are waiting for each others’ decision and nobody wants to take risk before the others, the price fluctuation will become very small and the price goes up and down between a narrow range. We can see ranging in all different time frames. We can see the market ranging tens of times a day in one minute chart, several times in 5 minutes chart and a few times per year in the daily chart. A ranging in the one minutes chart can last several minutes and in a daily chart can last several days. So with any of these time frames that you work, the rules are the same. It is just the length of the ranging time which is different.

A range, whether long or short, will be broken because the market can not stay in an indecision situation forever. A range can break down or up and this is what we want to know to take our positions and follow the market.

If you are a Fibonacci trader, all you need is finding a range in one of the time frames and then finding the high and low of the range. Let me show you some an example.

Please follow the notes on the image below as you are reading these explanations. The below chart is the GBP/USD daily chart. GBP/USD started a range from about 2008.01.22. The distance between high an low of this range was over 1000 pips. It was still tradable but obviously the market was not in a trend. When we were at about January 2008 we could not guess that we are at the beginning of the range but when the price went down on 2008.02.20 and retested the same support line at 1.9329 and then started going up again, we could know that we have a strong support at 1.9329 that can be the low of a range. Then when the price went up and made a high at 2.0392 on 2008.03.14 and then went down and retested the 1.9329 support for the third time on 2008.05.14 we could be sure that we are in a ranging market. Please note that in a ranging market one of the triangle, wedge or even head and shoulders patterns may be seen.

This is how you should see the chart and analyze the market and guess what will happen. 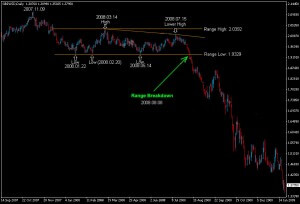 So far we have a range and all of the signals (higher lows) tell us that this range should break down. However when we are not sure what will happen and what the direction of the breakout can be, we have to wait until the breakout happens. We really don’t have to guess it. We can wait and see it and when the breakout happens we can take the proper position. When the low of the range is broken down we can go short and when the high of the range is broken up we can go long. 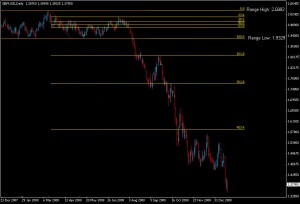 If I had predicted that the range will break up I should have plotted the Fibonacci levels from top of the range to the bottom and so the 161.80, 261.80 and 423.60 levels would be placed above the range.

Now let’s look at the chart with a bigger magnification (the below image), and I will tell you how and when you could take the proper position and where would be your target. The 2008.08.08 candlestick tells us that the range is broken down because it is closed below the range low. We could go short at the close of this candlestick if we are not already short after the formation of the 2008.07.15 lower high. Our target would be the 161.80 level and the stop loss had to be placed above the open of this candle.

It is time to tell you about the importance of some of the Fibonacci levels. When a range is broken up/down the 161.80 level is the guaranteed target level that in 95% of the cases will be reached by the price. If the breakout is strong enough, the 261.80 and even the 423.60 will be reached too. Among the Fibonacci inside levels (the levels that are placed between the 0.0 and 100.0 levels) the 23.60 and 38.20 are the most important one and as you can see the 2008.07.15 lower higher is formed exactly below the 23.60 level and before this lower high we have a small lower high which is formed below the 38.20 level (the red arrow). Do you see how exactly and precisely the Fibonacci levels work? 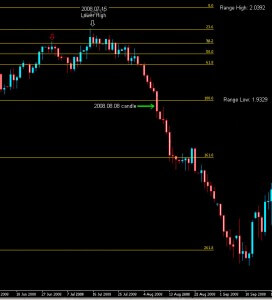 Again when the price broke down the 261.80, it went up and retested this level, but the 2008.10.20 candle indicated that it would keep on going down again. Why the 2008.10.20 candle? Because it is a bearish candlestick that closed below the low and the close of the last 5 candles. It also has covered the whole bodies and shadows of the last three candles and have formed a bearish signal pattern which is called Dark Cloud Cover.

Could you go long when you saw the price is going up after breaking down the 261.80 level? You could, but you should not because it was against the trend direction. 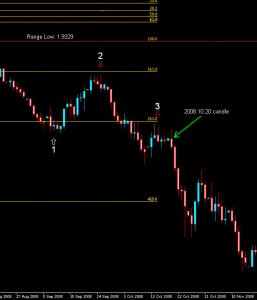 Now let me tell you about a different way that we could trade with this downtrend. This is the method that some conservative traders use to trade and I like it because it is safer and wiser.

We could wait until the range becomes broken down and the downtrend becomes confirmed. Then we should have waited for the price to start going up and makes the first correction, flag or consolidation. Then when it started following the downtrend to go down once again, we could go short. Take a look at the below image and you will know what I mean. I am now talking about the Elliott Waves. What I am trying to say is trading the second Elliott Wave which is the best one.

Just have an eye on the below image and follow the numbers as I am explaining. It is exactly the above chart but with a different way of trading.

In many cases a trend will be started when a range becomes broken (As you saw above). As I said ranging means indecision. When we have a ranging market, it means traders are waiting for each other to take the risk. They want the price to start moving and then take the proper position. They don’t want to take any risk before the others. When the market breaks the range (#1 in the below image), the traders who have been waiting for the market to move and break the range, follow the newly started trend and take the proper position (short position in this case) and this will provide more fuel for the price to move to the breakout direction (to go down in this case). 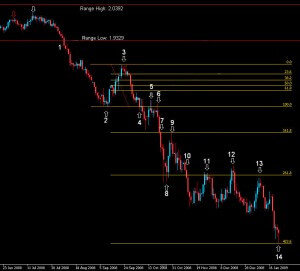 When the price starts following the breakout direction, it is the beginning of the second Elliott Wave which has the biggest movement and is the best to trade. Some professional traders only trade this wave. At the above image, the second wave is started at #3 and is finished at #8.

Fibonacci levels are the best tools to show us the waves and our entry and exit points:

Your main profit could be made by trading the second wave (#3 to #8), and some traders do not take any position after that because in most cases the market becomes choppy after the second wave.