The stock market’s recent advance has been nothing less than spectacular. Caveat emptor: the rally was mainly in the large cap stocks. The FED’s determination to raise interest rates in December is predicated on the upcoming economic data. One of the most important releases comes out on November 6th, the jobs report.

Gold has been falling, and we are still short the miners expecting blood to run on Friday on GDX and very likely the SPX too. Good news is likely to be bad news.

Cutting to the chase, the charts below tell the tale: a 6-7% drop in the SPX and Dow Industrials expected and further blood in the miners into the ideal November 12 date. GDX could easily fall below $12 this time and SPX should go below 1972 according to the IMP. We have a Rising Wedge also that has been broken and Thursday formed a spinning top in a down trend, which often precede big moves.

Technical divergences on the SPY include: stochastics, money flow, OBV and momentum amongst others. The daily MACD turned down today for the first time in a few weeks. E-wave analysis suggests that after this pull back, a faster, more powerful up-wave should develop and take at least the Dow Industrials to all time new highs soon. The whipsaws are likely to continue as uncertainty about the FED’s intentions stay on the burner for a while. 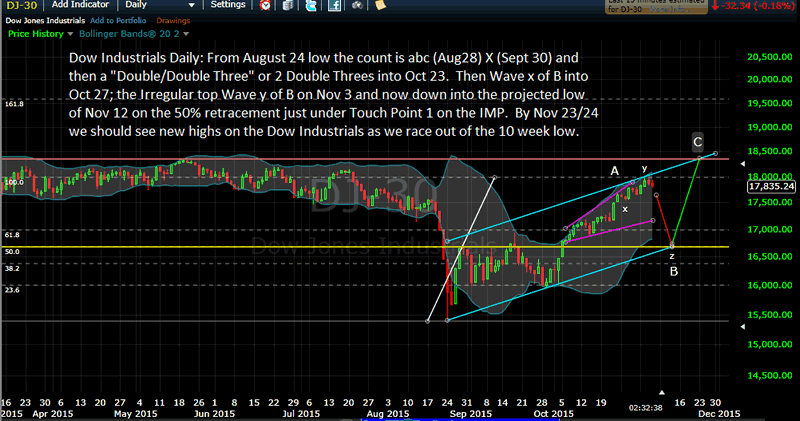 The last 4 of these charts was written on November 4 and much has come to pass already with GDX breaking down the door of the daily Bollinger Band. The FED’s hinting last week will likely come to haunt us on Friday this week, a delayed reaction.