There are many fundamental factors to consider when trading your favorite Forex pairs. While many traders may be quick to dismiss fundamentals these underlying factors have the ability to cause shifts in buying and selling patterns of traders. As demand increases for a currency so does its value. Likewise as money flows out of a currency its value begins to decrease.

To get a better understanding of market fundamentals, today we will look at capital flows and interest rates. Let’s get started!

What is a Capital Flow

Capital flows are the basics of Forex fundamentals. Just as the name implies this describes the flow of funds from one designated currency to another. Normally this flow is directly related to capital investments inside of a particular country. One typical example of this is if a foreign investor wanted to invest in stocks on the S&P 500, it would require Dollars to do so. This means money would flow into the USD from another currency to make the purchase.

The logic from here is one of supply and demand. If capital inflows exceed outflows that means there is a demand for countries currency. This can provide fundamental trading opportunities as for traders as prices rise to accommodate the new demand. This is also true with a net capital outflow. As there is less demand for a particular countries currency, we would expect a fundamental opportunity to place new sell orders.

Interest rates are one of the primary reasons for the international flow of capital. As investors, speculators, and traders all look to maximize their returns they tend to look towards higher yielding investments. That means countries with the highest interest rates coupled with strong economic data tend to see their countries currency strengthen due to capital flows.

Keeping an eye on the economic calendar can help traders become aware of potential changes in interest rates. Central banks are charges with setting the banking rates, and will periodically hold meetings to make any changes to this policy. As these changes take place, demand for a specific currency can fluctuate based off of the decision. Let’s take a look at an example of this theory in action. 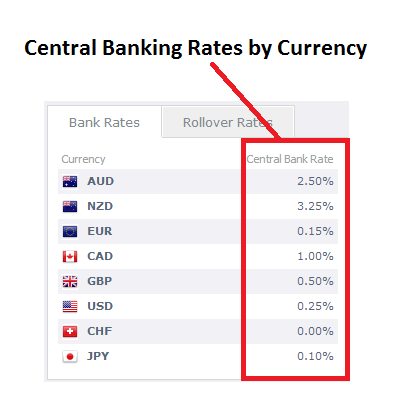 Below we can see a 1Hour chart for the NZDUSD. This is a great example of capital flows at work. As of 21:00 GMT on Wednesday the RBNZ (Reserve Bank of New Zealand) released their rate decision. The outcome was a rate hike of .25%, moving their central bank target rate to 3.25%. Almost immediately after the event prices of the NZD (New Zealand Dollar) began to rise. Why did this happen?

When the RBNZ raised rates, they also made it more attractive to hold the NZD relative to lower yielding currencies. When compared to the USD, the differential between their respective rates expanded to 3.00%! Traders and investors looking to take advantage of this yield differential were actively selling the USD (US Dollar) while purchasing the NZD (New Zealand Dollar). As demand for the NZD increased, money quickly began to flow out of the USD causing the prices and momentum on the chart depicted below to rise. 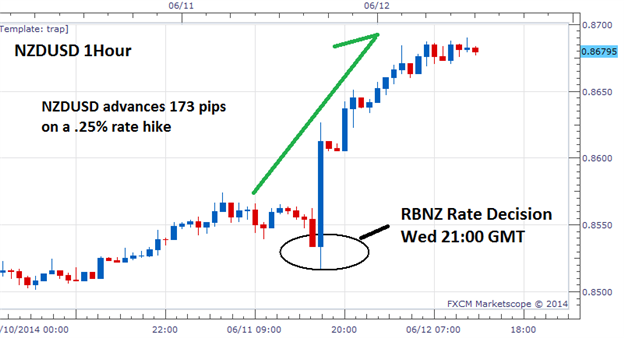 As a fundamental trader, it is important to know how different events affect the valuation of a currency.