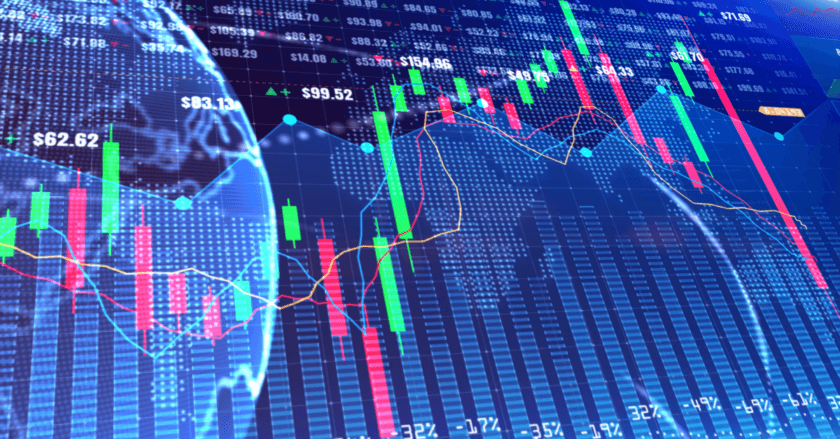 Based on his research that showed that financial markets bear a striking resemblance to the basic harmony found in nature, Ralph Nelson Elliott postulated that price movements in financial markets follow patterns, but not necessarily in time or amplitude. Elliott developed the Wave Principle on empirically derived rules for interpreting the price action.

He hypothesized that financial prices unfold according to a basic rhythm or pattern: five waves in the direction of the trend and three waves counter to the trend (figure 1). Elliott named the five-wave upward movement an impulse wave, and the three-wave counter trend a corrective wave. The most exciting and profitable impulse wave is the third, and this analysis deals with methods of trading this wave.

Figure 1. A bullish market breaks into a five-wave/three-wave pattern for a complete market cycle of eight waves. The five-wave bullish move is an impulse wave and the three-wave counter trend is a corrective wave. The third impulse wave tends to be the most exciting.

A more complete picture can be seen in figure 2, which shows the basic structure of the entire market cycle.

Waves (1), (3) and (5) are called impulse waves, and are subdivided into five waves of smaller scale. The subwaves of impulse sequences are labeled with numbers. Waves (2) and (4) arecorrective waves, and are subdivided into three smaller waves each. The subwaves of corrections are labeled with letters. You can see the structure of the five-wave bullish impulse wave in Figure 3.

Figure 3. The structure of the five-wave bullish impulse wave

Elliott set up three essential rules of interpretation of his wave principle:

Figure 4 shows an example of the Elliott Wave analysis in USD/CAD.

Figure 4. An example of the Elliott Wave analysis in USD/CAD

The Place of Wave 3

Putting the waves in a context prior to Elliott, Charles Dow said that the market has three stages: accumulation, run-up (uptrend) or run-down (downtrend), and distribution.

Waves 1 and 2 are more difficult to identify. Wave 1, which is often the shortest of the impulse waves, tends to look like a correction. Meanwhile, wave 2 is identified by its three-subwave structure and tends to retrace by about .618% of the first wave. These two waves form Dow’s accumulation phase and this is where some traders build large positions.

Wave 3 is where the action is. Along with Wave 5 or many times all by itself, Wave 3 is the run-up or run down-phase, which is when the market trend is more obvious and traders of all levels jump on the bandwagon. This wave tends to be the longest, and is never the shortest. It provides a dynamic move, and once the market breaks above the top of Wave 1, more traders jump in and fuel market.

Volume tends to be good and the fundamentals support the direction. Take a look at Wave 3 in figure 5, which features USD/CAD. It’s a downtrend for the pair but naturally an uptrend for the Canadian dollar. Why did the market like this low-yielding currency? Because Canada is very rich in minerals and when the world economy is strong and the appetite for risk is high, everybody wants that currency. More importantly, foreign entities buy Canadian companies, and this M&A activity requires Canadian dollars.

Price trends are essential to technical analysts and traders, and Wave 3 provides this trend. Simply put, the trend shows a direction of the market that is likely to last several weeks to possibly a few months.

To monitor the trend, simply draw a trendline. If the market provide good peaks in an uptrend or lows in a downtrend, then you can draw a channel line as well, which will be parallel to the trendline only accidentally. If the specific market has only one significant top in an uptrend or only one low in a downtrend, then just draw a parallel line to the trendline that goes through that important price to get a channel line. And if the channel you just drew is a large enough, then bisect it to get more valuable crossovers with the prices.

The initial push higher in a rising market comes from the break above the top of wave 1.

If this was the highest high, then where is it going from here?

One way to find targets is by using extensions. To do so, use the standard Fibonacci ratios of .382 and .618, and probably some of Gann ratios as well: .125, .25 and .5. A combination of these two sets of ratios should provide accurate targets, the most common of which are .25 and .382. To obtain these targets, multiply the range of wave 1 with each of these ratios and add it to the range of wave 1 measured from its top.

Speaking of extensions, Elliott identified several extensions himself, but they are not easy to use.

In the five-wave sequence, one of the three impulse subwaves tends to generate an extension. These subdivisions are of nearly the same amplitude and duration as the larger-degree waves of the main impulse sequence, giving a total count of nine waves of similar size rather than the normal count of five for the main sequence.

Extensions can be useful guides to the lengths of future waves. Most impulse sequences contain extensions in only one of their three impulsive subwaves. Therefore, if the first and third waves have about the same magnitude, the fifth wave will probably be extended.

Extensions may also occur within extensions. Although extended fifth waves are not uncommon, extensions of extensions occur most often within third waves. See figure 6.

Meanwhile, stay with the trend, although this may be easier said than done. Traders should consider moving averages as flexible support and resistance lines. More often than not, a 20-day moving average will act as a reliable trendline. The intersection between the market and this moving average should provide good buy and sell signals in trending markets.

Another reason to use moving averages is the overbought and oversold signals that may occur when compared to the currency. If the currency and the moving average are trailing too far away from each other, this is a warning that the currency might change direction. But keep in mind that a divergence on its own is a condition, not a signal, so use a trigger from a different source, such as the break below a support or a trendline.

Figure 7 shows that a 20-day moving average acted as a perfect resistance during the decline in wave 3. In two instances, which are marked with blue arrows, USD/CAD was too far below the average and the obvious divergence was corrected by the pair either trading sideways (first arrow) or even climbing higher (second arrow).

Figure 7. The 20-day moving average acted as a perfect resistance during the decline in wave 3. Notice the correction of two bearish divergence instances (blue arrows).

The opposite is true for a downtrend.

According to the rule of alternation, if wave 2 is complex, then wave 4 tends to have a simple pattern and vice versa.

Following this pause, which can be significant, the market gives the currency a final move in the major direction of the trend. This is when wave 5 comes to life.

This wave can be dynamic and extended. This is because everyone can see the direction and knows the move is approaching the end, so they will try to extract the last penny from the move.

Wave A can be difficult to spot through all the action, but its five-subwave breakdown gives it away. Wave B may be of different complexities and lengths since the last bulls are making their final mark in a previously rising market and the bears are testing the waters and starting to sell. Wave C confirms the end of the trend and in a bullish market it will fall below the bottom of wave A.

Traders can use Elliott Waves even without using all the intricacies of this complex analysis method. They can use the clear and rich signals of all waves at macro scale. And they can use wave 3 as a standalone trend, to which they apply standard trend analysis